Below are advanced rules you can apply for those who want to play the game at a higher level. 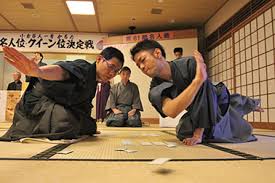 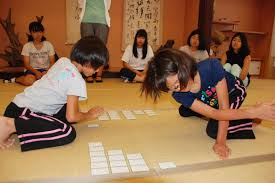 Rules for Competition in Tournaments

When the game is played at home or in school the rules of the game as presented previously suffice. But when official tournaments in Kyogi Karuta (competitive karuta) are played competitively, more advanced and detailed rules apply.

For example there is a rule about Otetsuki (foul): In Kyogi, you are allowed to use only one hand throughout the whole game. You must decide which hand to use before the game starts. There is a penalty if you touch a card with the wrong hand.

The World of Kyogi Karuta is a homepage for everyone interested in playing kyogi karuta (competitive karuta). You can read about the detailed rules and instructions of how to play Karuta as a sport or intellectual martial arts. This game/sport has become well known and popular through the anime and manga Chihayafuru.

You can download the Complete handbook on Kyogi Karuta- competitive karuta published by The World of Kyogi Karuta. PDF-document: handbook download (1,3 mb) (Eng)

The homepage of  Karuta Club München (Munich) presents a wonderful explanation including rules (in German) for Kyogi Karuta.

Kyogi Karuta Clubs around the world.

Go authentic! Try the original Japanese competitive karuta!
Can’t read Japanese? No problem! The Kyogi Karuta clubs around the world can teach you how to play in Japanese!

The Karuta Club München introduces the karuta clubs in the world on their website. Therefore, if you are interested in playing karuta the competitive way in Japanese, you can check here if there is a karuta club you can join near you. The website of Karuta France is not in use but you can check them out on Instagram  and Facebook. There are also karuta clubs in cities such as Brest, Lyon, Aix, Belfort in France other than in Paris. Hungary and Russia also have a kyogi karuta club. The club in Budapest is called Verseny-Karuta club, in St. Petersburg is called Asa no Tsuyu and the club in Moscow is called Moscow karuta club. And Karuta Club Monterrey in Mexico too!