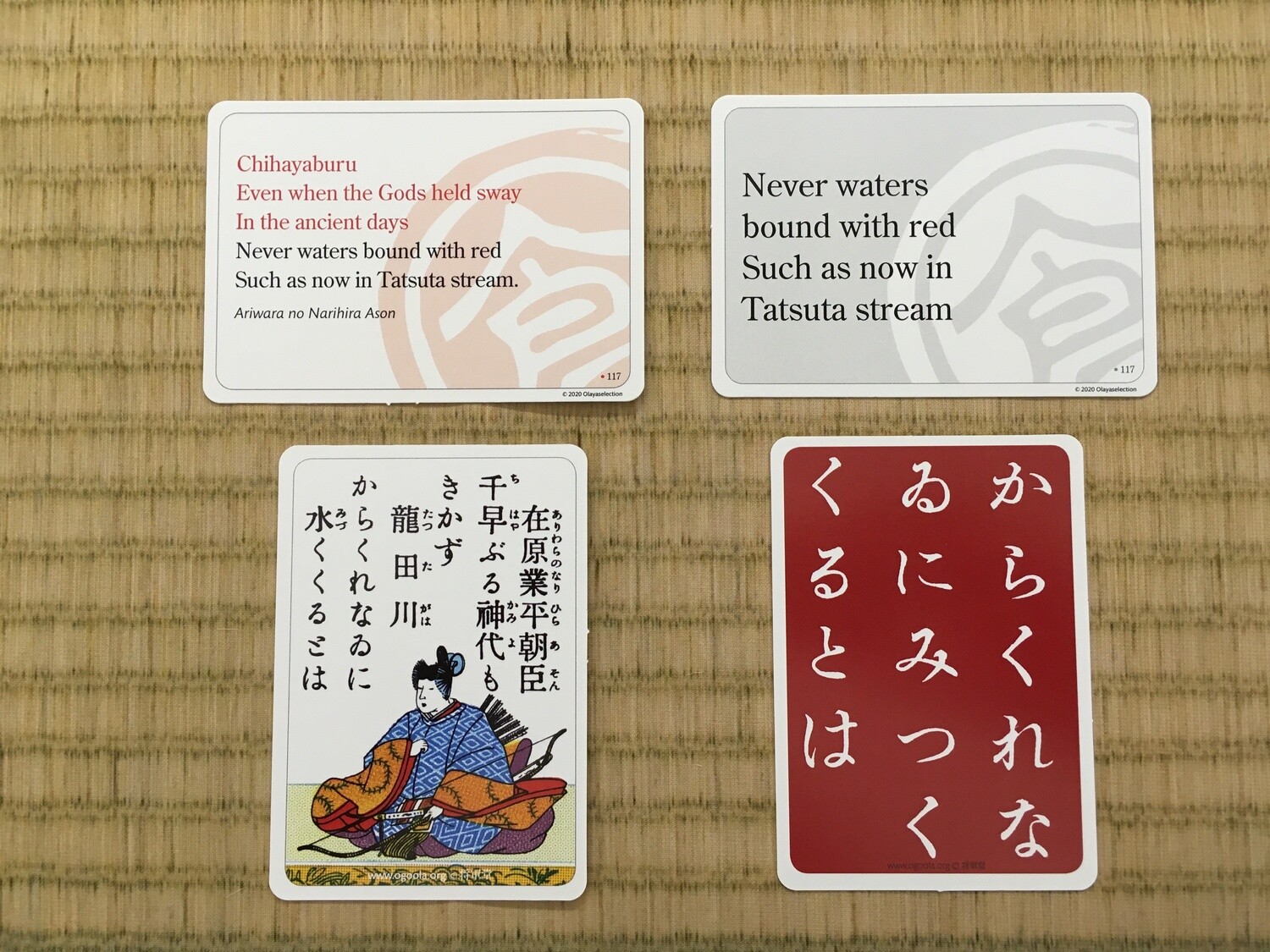 The Expansion Pack1 cards use 7 newly translated poems of the Hyakuninisshu, using the original pillow words called Makurakotoba. These Hyakuninisshu Translated Karuta cards are for people who are interested in playing Karuta as close as possible to the original Japanese karuta. The poems are translated by Olayaselection using the MacCauley classic translation (1917) as a base. We kept the 575-77 syllable rules of the Japanese waka form and kept the original Makurakotoba in our translation. Using the Makurakotoba in the translation makes it sound much more genuine and true to the original poem. Makurakotoba is used together with a certain word to strengthen its meaning. For example, if you use the Makurakotoba, "Chihayaburu", it strengthens the word God in the poem. The Expansion Pack also includes a Joka which is a poem always read at the beginning of a match in a karuta tournament. When the reader begins to read the Joka, it means that the game has begun! When the reader reads the Joka, she must always repeat the second part of the poem once, putting about a 4 second pause between the first and the second time she reads the second part (the second part called shimonoku is the last 7-7 syllables of the waka). You can find the recordings of the readings of the expansion pack 1 on Spotify. Search Hyakuninisshu English Karuta - Makura Kotoba. You can also download our recording of the Hyakuninisshu English Translated Karuta free of charge from our web page. The poems are sung. We included the Expansion Pack1 in the recordings. The Hyakuninisshu poems that use the Makurtakotoba are cards/poems number 2,3,4,17,33 and 39.

Contents: 1 Joka card which has no playing card. 6 reading cards, 6 playing cards (3 are blank cards because no change has been made from the MacCauley translation which means that 3 of the playing cards (cards 3, 33, 39) are the same as the playing cards in the Hyakuninisshu English Translated Karuta games with 50 or 100 cards each.)

Shipment Information: We send all our products with the company postnord. It is the northern European post. For customers who select the track and trace service for their shipment, the following link will get you to the track and trace service page. Just click the link and input your Shipment ID that we notice you via email and you can track your parcel as soon as it's on its way. Link to postnord.
https://www.postnord.se/en/our-tools/track-and-trace