Ogoola Karuta can be played in various ways; either one on one, in teams or everyone against everyone. Below we guide you through the first steps.

We advise you to download our app  – the app reads the poems out loud, allowing you to play/train on your own or replace a reader when you don’t have one. The poems are read by a professional singer and actress, Myrra Malmberg.

Chirashidori – for beginners
A playful way to play.

”Chirashidori” means “Spread out and take” 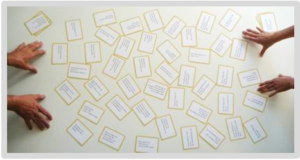 1. Several players, individuals or teams, spread out around the playing area. This game can be played all against all or as a team competition.

2. Shuffle the cards. Spread the playing cards (Torifuda) all out on the floor or table.

3. The players gather around the spread-out cards.

5. If you recognize the second half of the quotation when you hear the first half being read, you immediately pick up the matching playing card and lay it aside, quotation side down.

6. If you do not know the quotation, the players wait until the Reader reads the second half of the quotation (the same text as is printed on the playing card).

7. You are allowed to pick up a playing card anywhere among the spread-out cards, nearby or far away, just as long as it is the correct playing card.

8. If you happen to pick up the wrong card during the reading, you are penalized by losing one of the cards already in your possession (give it to the Reader or collect the penalty cards in a separate pile).

9. If the first card a player picks is wrong, she has to remember that she is due to pay a penalty card as soon as she is able to.

10. When only two playing cards remain, the first player to pick up a correct playing card also gets the final card.

11. The player who has picked up the most cards after the Reader has read all the reading cards, wins the game!

Divide all individuals into two teams before you start playing the Chirashidori game. When the game ends, sum up each team’s total number of cards.

This is highly recommended when you have more than 8 players. 20 to 30 players can participate and you can double the number of playing cards if you wish.

Genpei-Gassen – an exciting and competitive way to play.

Genpei means the Genji and Heike clans. Here, Gassen means battle. Genpei Gassen differs from Chirashidori in the sense that the team which gets rid of all the playing cards on their own side first, is the winner. 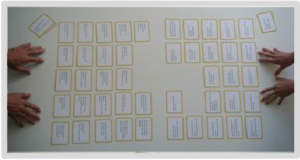 2. The two teams sit or stand on opposite sides of the playing space, facing each other.

4. Before the reading begins, all players sit quietly resting their hands on the table or floor (not over the cards!). The Reader reads a reading card ( a quotation of a poem) aloud. First the whole quotation, then if no one has yet found the playing card the reader reads the second half once more.

7. Note that you are allowed to pick up cards from both your own team’s side and from your opponent’s side too!

9. If you happen to pick up (or touch!) the wrong card by mistake, as a penalty, your opponent gets to hand over a card from their side which you can place wherever you like among the cards on your side.

10. If both sides pick up (or touch) a wrong card at the same time, the cards are just put back again, and the game continues.

11. The team which gets rid of all the playing cards on their own side first is the winner!